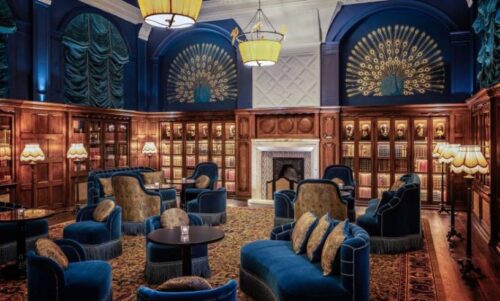 With L’Oscar London, Michel Reybier Hospitality is expanding its portfolio with another unique hotel in an attractive destination. Part of this property was once a Baptist Church and was built in 1856 in the Victorian style. Between 1901 and 1903 the building was extended to become the headquarters of the Baptist Church in England. The building is located on Southampton Row, nestled between Covent Garden and Bloomsbury, not far from the British Museum. The name L’oscar pays tribute to the world-famous writer Oscar Wilde. It ties into the literary and history of the area, as it was home to a group of associated writers, philosophers and artists including Virginia Woolf, E.M Forster and Lytton Strachey, known as the ‘Bloomsbury Set’.

Listed Grade II* and considered as a particularly important building of more than special interest in the United Kingdom, the hotel is not only the first of the group in London, but it was also the first time that the renowned architect Jacques Garcia created the interior design of a hotel in London. True to his style, the Frenchman lent the rooms opulence and, above all, atmosphere with a keen sense of history and attention to detail.

The boutique hotel, which opened in 2018, has 39 spacious rooms. From the Superior Room to the L’oscar Suite, each Garcia-designed room has its own unique charm, many with fireplaces and, of course, the latest technology.

The Baptist Bar is set in the former chapel, featuring an octagonal dome. One of the eye-catchers at L’oscar Restaurant is the illuminated onyx bar. The house, which is filled with many arts and craft treasures, also has a beautiful oak-lined library and The Committee Room, which is adorned with an original fireplace engraved with a scene from John Bunyan’s The Pilgrim’s Progress, is perfect for smaller events.

About Michel Reybier Hospitality
For more than 20 years, Michel Reybier has been blazing the trail for a singular, highly contemporary vision of luxury and hospitality. In both Switzerland and France, each of the Michel Reybier Hospitality destinations upholds his cherished values of excellence, authenticity and simplicity. Whether in a hotel, a villa or a private apartment, in the mountains or by the sea, in the countryside, in the heart of the vineyards or in the city… A sole requirement: namely exceptional places that throb with a distinctive emotion. A sole ambition: to share a refined art of living, dedicated above all else to our guests’ well-being and pleasure. This holistic approach is based on unforgettable experiences, where sport, food, wellness and passion form an inseparable whole. This approach is supported by the medical expertise of Nescens, whose ultimate goal is to ensure people live better, healthier lives for as long as possible. The promise of instilling meaning into each and every moment.