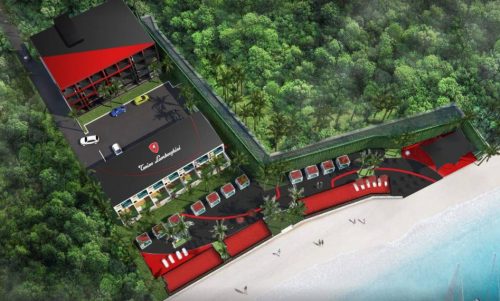 Nestled on Phuket’s stunning sunrise coast at Ao Po, overlooking the breath-taking seascape of Phang Nga Bay, the Bay of Icons is set to become a highly desirable destination for affluent investors and international travellers alike. Covering at least 20 rai (3.2 hectares) of spectacular seafront land surrounding the Ao Po Grand Marina, this idyllic area will be transformed over the next five years under Utopia’s masterplan to create an unparalleled lifestyle and leisure enclave.

Upon completion, the Bay of Icons will be a fashionable community comprising an exceptional collection of chic amenities and bespoke services. High net worth individuals will be able to invest in a choice of premium residences and pristine pool villas, all immaculately designed and fitted to first-class specifications. Many will also showcase panoramic views of Phang Nga Bay.

High-end travellers on short or extended breaks in Phuket will be able to stay in style with a choice of ultra-luxury design hotels. Utopia Corporation is in the final stages of discussion to bring in another iconic high-end fashion branded resort, the first in Southeast Asia, with impending announcements due by April 2021. While construction work on the Tonino Lamborghini Boutique Hotel Phuket will commence in November 2021, with the grand opening scheduled for November 2023. These two legendary brands will exude glitz and glamour, with accommodation and amenities that elevate the Southeast Asian hospitality scene to the pinnacle of exclusivity and excellence.

Hotel guests and residents will be able to stroll past multi-million-dollar mega-yachts on the waterfront promenades of Ao Po Grand Marina, shop in luxury designer boutiques and retail outlets, dine and unwind at a selection of sophisticated restaurants and bars, or play golf at a choice of nearby clubs, including the world-class Mission Hills Phuket Golf Course. Phuket’s Old Town, with its classical Sino-Portuguese architecture and lively markets, is a just a short drive away, and Chalong Bay is a popular spot for water sports, such as kite-surfing.

The Bay of Icons will be easily accessible; VIPs can arrive in style either by air or sea, with the 300-berth marina and a private helipad, and Phuket International Airport is just 30 minutes’ drive away, offering direct connections to many global cities.

“Phuket is a truly outstanding option for upmarket investors. The island’s exquisite natural beauty, easy accessibility and international services have attracted a wealth of investment in recent years, including affluent Asian and overseas residents seeking a spectacular second home or a new life in the sun. With its collection of global brands, including Southeast Asia’s first Tonino Lamborghini hotel, all set against the backdrop of Phang Nga Bay – the scene of so many Hollywood movies – the Bay of Icons is truly unique. This development is set to become the ‘jewel in the crown’ of Thailand’s tourism industry, a new national landmark and one of the world’s most prestigious waterfront destinations,” said Mr. Hachi Yin, Chief Executive Officer, Utopia Corporation.

An exciting and innovative company that strives to rewrite the rulebook, Utopia’s company slogan is “Dare To Dream”. Having been established in 2015, it has grown rapidly to become one of the largest real estate developers in Phuket, with a collection of hospitality, residential, commercial and entertainment projects across the island, along with architecture, design, engineering, construction and hotel operation services. It operates three own-branded hotels in Phuket: Utopia Kata, Utopia Loft, and Utopia Naiharn, which was named as Asia’s “Top Emerging Hotel” in the Now Travel Asia Awards.

Utopia Corporation was established in 2015 and presently is the largest real estate developer in Phuket, Thailand. Utopia Corporation contributes to solving fragmentation on the island by integrating and planning for connectivity in its masterplan ¬to develop the Utopia Empire: a development portfolio that includes a collection of hotels, apartments, villas, commercial complexes, architecture, interior design, engineering and hotel operations. Under the leadership of its CEO, Hachi Yin, Utopia Corporation, comprises of many divisions, including Utopia Construction Group, Utopia Hotel Group and Club Utopia.

Tourism Unites Behind Glasgow Declaration on Climate Action at COP26