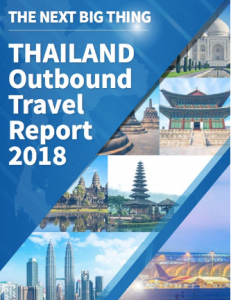 Bangkok (Thailand) – March 5, 2018 (travelindex.com) – Outbound travel from Thailand is set to hit 10 million this year, according to the first comprehensive market research report on what is expected to be the “The Next Big Thing” in Asia-Pacific tourism.

Designed to help destinations worldwide better understand the dynamics and drivers of this promising source of business, the report says that outbound travel from Thailand, including both Thai citizens and the thousands of middle-upper income expatriates, hit 8.2 million trips in 2016, almost double the 2011 figure.

It is projected to have crossed 9 million in 2017 and is heading for 10 million in 2018, assuming that the global, regional and local geopolitical/economic situation remains stable.

Compiled and researched by Imtiaz Muqbil, Executive Editor of Travel Impact Newswire, and one of the longest serving travel industry journalists in the Asia-Pacific, the study is available for sale through a variety of dynamic pricing options. Interested parties can email imtiaz@travel-impact-newswire.com.

Ease of accessibility will become a major determinant of future destination choice. Japan, which eliminated visas for Thais in 2013, has become the fastest growing destination for Thai travellers. Korea and Taiwan have followed the Japanese lead, and Russia is next.

All are stepping up marketing and promotional campaigns to narrow the significant gaps between the number of their tourists visiting Thailand and the number of Thais visiting their countries.

The report urges these countries on both distant continents to put more focus on their marketing profiles. It is rife with trends, ideas, contacts and opportunities on how to do so.

The report also blasts the visa application processes for Europe, the UK, North America, Australia and New Zealand as being “insulting, offensive and expensive.”

Says the report, “Nearly 90% of the documentation required is identical, with complicated variations in the rules and regulations. Technologically, it should be possible for some kind of a single-visa system to be worked out. Aside from being a money-spinning profit centre, it is not clear what security or immigration threats these visa-requiring countries are hoping to alleviate. Some of the questions asked in the application forms are totally irrelevant. The requirement for proof of financial support is also questionable in an era when thousands of well-off Thais are well-armed with credit cards and far better off financially than citizens of the visa-requiring countries.”

It also urges the South Asian countries to clean up their visa policies. “South Asia as a whole gets dragged down because only The Maldives gives visa-free access to Thais. India, Pakistan, Bangladesh, Bhutan and Sri Lanka all require visas. Although India and Sri Lanka have on-line visas, cumulatively, the cost and time factors involved in getting visas reduces the appeal of these countries vis a vis competing countries.”

The report also notes the big gap between the number of airlines flying to Thailand (118 as of the winter 2017/2018 airline schedule) and the number of foreign NTOs having full-time or marketing representative offices in Thailand (only 12). A handful of other countries have separate arrangements such as through appointed GSAs.

It also notes the enormous promise of road travel as the completion of the Asian Highway allows Thailand to take full advantage of its unique geographical location at the heart of the ASEAN region, with strong overland connectivity to Myanmar, Laos, Cambodia and Malaysia.

WTTC: African Tourism Sector to Recover by a Third