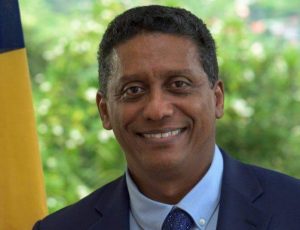 Victoria, Mahe (Seychelles) – May 1, 2018 (travelindex.com) – President Danny Faure has announced a Cabinet of Ministers reshuffle and with it, a move from tourism for Minister Maurice Loustau-Lalanne, after just over a year and a few months in office. He has been replaced by Minister Didier Dogley who was formally the Minister for the Environment. Minister Loustau-Lalanne moves to the Ministry of Finance. Minister Dogley’s new Ministry continues to cover Tourism, Civil Aviation, Ports & Marine.

We wish Minister Dogley well as the new Tourism Minister and we take this opportunity to wish all Ministers success in their new portfolios.

The morning show on Seychelles Broadcasting Corporation (SBC) TV by popular presenter Jules Hoareau appealed for large hotels on La Digue not to be in the business of hiring of bicycles. The insinuation that Le Domaine de L’Orangeraie was in that business was made and the Resort’s Owning Company was contacted to seek their views.

Joe Albert, the Group’s Chairman confirmed that the Resort was not in the business of hiring bicycles to their guests and to visitors on La Digue, but he accepted that one of the shareholders in the company was personally involved in a bicycle hiring business which has now raised the concern.

Le Domaine de L’Orangeraie of La Digue has 63 Villas which includes a Presidential Villa and a couple of Exclusive VIP Villas. For these eight villas they attach 16 bicycles for their sixteen guests which they offer on a complimentary basis as part of the facilities on offer. These sixteen bicycles are owned by the resort and covered by the Insurance Policy of the Resort.

Joe Albert agrees that the hundred or so hotel guests should be able to have access to all those in the business of hiring bicycles and that he will be moving to open up that possibility very soon. Today the La Digue “Severe Bicycles” has exclusivity at the resort and the Chairman of the Hotel’s Owning Company agrees that this needes to change as the practice is seen as being unfair.

He nevertheless emphasised that Bicycle Operators who wish to offer their bicycles to the resort’s guests will be required to show that they have insurance for their Bicycle Hire business. “This is only the duty of care we have as the resort” said Joe Albert.

Le Domaine de L’Orangeraie of La Digue employs 217 staff members out of which 72% are Seychellois with a large proportion being Diguois, or affiliated with La Digue.

Tourism for All & Air Seychelles cooperation

The Seychelles Hospitality & Tourism Association (SHTA) has moved to involve everyone in the drive to consolidate the island’s tourism industry. Tourism for All is the call, and a great initiative. Without tourism the economy of the Seychelles will struggle and it is important for each and every Seychellois to not only embrace the industry, but to also defend it. Every Seychellois will be affected if tourism suffered a slowdown, so it is right to expect everyone to work together to for the growth of the industry.

The revived spirit of cooperation between Air Seychelles and the SHTA is commendable. It is a win win for everyone. The airline needs the tourism industry to speak about them and what better way than to find appropriate avenues for the trade to use Air Seychelles for their marketing and sales missions. Special applicable rates for the tourism trade is a positive move that should bear fruits.

The book spells out the road to opportunities and the forward was written by Alain St.Ange, the former Minister for Tourism. Civil Aviation, Ports and Marine of the Seychelles who has been a good friend of the author Elvis Muturi wa Bashara.

Elvis was also Minister for Tourism in RDC and was one who was actively present at major tourism forums and at the UNWTO.

The Environment remains the preoccupation of everyone

The posting by SIF (Seychelles Islands Foundation) on plastic waste building up on Aldabra Atoll, the UNESCO World Heritage Site and considered the most remote place on the planet, is a worry.

As we are reporting of measures being taken by Hotels and Resorts (See article on CaranaBeach in this issue), we cannot emphasise enough that every Seychellois must be seen to be good custodians of what we have been blessed with. Seychelles has a picture-perfect landscape with many unique attributes that continue to attract visitors to its shores. The Seychellois from an early age work to protect their environment, and today the islands have Wild Life Clubs in schools only to re-emphasise the protection of the environment as the number one priority of each and everyone in the islands.

We hear of appeals to rid plastic from our day-to-day lives, but the recent posting by SIF shows that more needs to be done to educate or to sensitise the world we live in to respect the environment. We have but One World and we all have a part to play to save it.

Wine Tourism and Rural Development Discussed in Portugal in September 2021

WTTC: One Million Jobs a Day Being Lost Due to Coronavirus Pandemic